Stripers annual spawning run lasts from the middle of April through the end of May. Every year, Mark is sure to take a vacation during this time so he can go fishing. Mark is now back to work after spending a week off on the river. For nine days straight, Mark fished the Hudson River from sunrise to sunset.

Stripers average from 10 to 32 pounds. The largest recorded striper caught on the Hudson weighed 60 pounds..

So far this year, Mark’s biggest catch was 15 pounds: 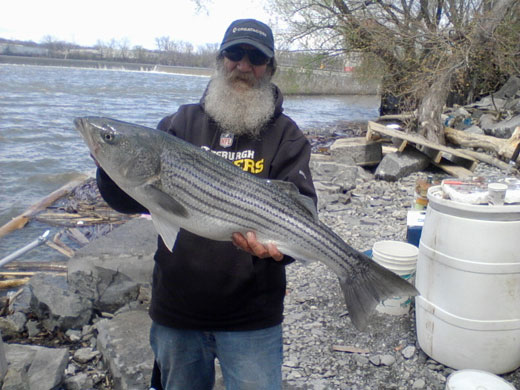 Mark throws every fish he catches back into the river unharmed. He says he’s in it for the sport and the joy of catching a fish.

Shortly after striper season, Mark will begin fishing for lake trout on Lake Champlain. Then he will look forward to fishing the Tomhannock Reservoir for walleyes in the fall.