Skip to content
Home › Blog › Benefiting Others While Having Fun

Despite unusually cold temperatures in Orlando that didn’t get much higher than the freezing mark, Creatacor President & CEO, Tom Lemery and his wife Gail put on their hats, gloves, sweats and running shoes, and participated in Disney’s Marathon Weekend at Walt Disney World in Florida. The 5k “UP – Family Fun Race” was themed after the Disney movie “UP”, which opened in theaters in May of last year. This was the first event of three for the weekend, which included a half marathon on Saturday and a full marathon on Sunday. 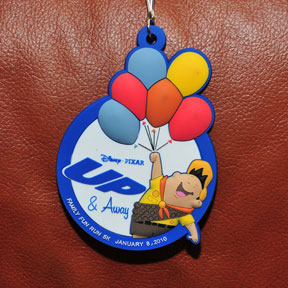 Presented by Cigna and sponsored by companies like; Sharpie, Champion, Kodak, Spira, Dasani and others, the 5k race benefited the Leukemia & Lymphoma Society. The 3.1 mile trek began in the EPCOT parking lot and weaved through the back lots and behind the attractions through EPCOT’s World Show Case and around Space Ship Earth to the finish line. Although the race was not timed, the Lemery’s noted that they finished the race with one of their best times, which is rumored to be under 40 minutes. “It’s a great way to help out a worthy cause” said Tom. “Plus you get this very cool medallion for participating.” he chuckled. Tom and Gail are regular participants in the 5K races offered by Disney at Walt Disney World throughout the year. Gail participated in 5 such events in 2009, while Tom managed to run in 4. Each event benefits a different charity including the National Kidney Foundation, the V Foundation for Cancer Research and Breast Cancer Awareness. Participants get to run (or walk) through many areas of the parks like Hollywood Studios, Animal Kingdom and EPCOT that are typically unavailable to the average visitor. Rumor has it that there will be an event at the Magic Kingdom next fall. Gail say’s “We’ll be there for that one, I’m sure.”