Some of you may know our President & CEO, Tom Lemery from his over 30 years of service to our clients and to the Trade Show Industry, but what you may not know about Tom is that he has a passion for photography. This life long love of Tom’s began as a student at the Art Institute of Pittsburgh shortly before his career as an exhibit designer began to flourish. It’s not unusual for Tom to have his Nikon dangling from his neck or in his shoulder bag wherever his travels may take him. He and his wife Gail have traveled the globe and of course, Tom is raising his camera to his eye every step of the way. Tom says; “Great photo ops happen around us all the time. It’s just a matter of having your camera with you and knowing when to point and shoot.”

During a recent trip on safari in Africa, Tom snapped off over 6,000 images of everything from breathtaking landscapes to tree climbing lions. He was recently recognized for one shot he took while riding in the back of a safari vehicle in Tanzania. Tom turned to look behind him for their companion safari vehicle just as the sun was setting over the savanna. The photo titled; “Heading home after a day on the Serengeti” won first prize in the Micato Safaris monthly photo contest. 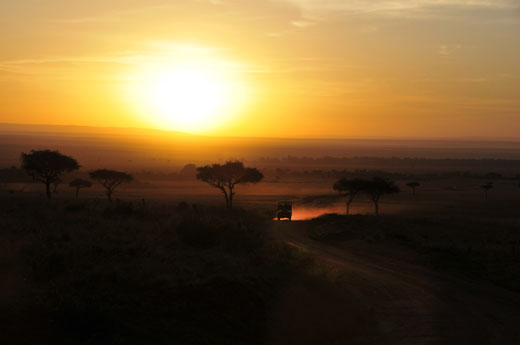 Tom has elected to donate the prize money associated with the award to AmericaShare, a project sponsored by Micato Safaris. You can find out more about AmericaShare at: www.americashare.org.

You can also see more of Tom’s work on his personal photo website: www.lemthomas.com, which Tom uses to share his photos with family and friends.