Rensselaer Polytechnic Institute’s commencement Colloquy last week at the school’s Troy, New York campus featured several prestigious panelists including; Neil deGrasse Tyson, a well known astrophysicist and director of the Hayden Planetarium at the American Museum of Natural History in New York City, the commencement speaker, Peter Orszag, director of the White House Office of Management and Budget, noted biotechnology inventor and Massachusetts Institute of Technology professor Robert Langer, Dr. Harold Varmus, a Nobel laureate who has been named the next National Cancer Institute director by President Barack Obama, and of course, RPI President Shirley Ann Jackson, who moderated the event. You can read more about the commencement event in this article from the Times Union. You can view video of the event here.

Clearly, these honorable people out shined our simple but very attractive backdrop, which was designed by RPI themselves and produced by Creatacor. After building outdoor projector housings with heating & cooling ability for RPI, we were asked to engineer and build a stage set for the Colloquy. The Cherry desk (center stage) is modular and pivots, allowing the moderator to see the panelist faces. The Maple backwall has five extra large custom fabricated rear projection screens with removable mullions. They can be easily reconfigured for use different events and venues. Everything assembles without the need for tools. The desk includes five built in HD confidence monitors located within each desktop. Kino-flo up lighting and DMX programmable LED down lighting provided accent illumination as well as functional lighting. The entire stage set was designed and fabricated in 3 weeks. We thank RPI for the opportunity to collaborate with them on the important project. 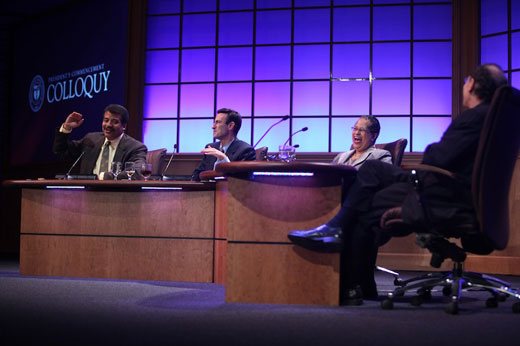