Creatacor was hard at work this Winter working on numerous projects. Three of these included exhibits for Techno Source, LEGO Systems, Inc. and LEGO Licensing for Toy Fair 2011 at the Jacob Javits Center in New York City.

The installation crew supervised by a few of our finest, including Dave West, Jim Dolan & Kyle Peterson, started setup on Wednesday and worked through Saturday getting all three exhibits up and ready for the open on Sunday. Rich sent in this report with pictures from the show floor.

The 20′ x 60′ Techno Source exhibit focused on 2 games: Tetris Link and 20Q (20 Questions). Our Exhibit Design Director, Wayne & our Graphic Design Guru, Jess, came up with a great design with full mural graphic walls and featured product display areas. The best carpenter on the planet (bold statement, but you’d have to see his work to appreciate it) Brandon Verdu, teamed up with Wayne to produce a giant 20Q game that came out amazing. 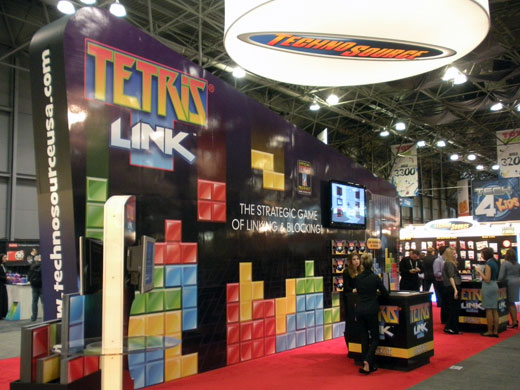 About Tetris Link from the Techno Source press release:

“The Tetris® brand is the most recognized casual gaming brand in the world. Today, toy innovator Techno Source and Blue Planet Software, Inc., the company that manages the exclusive licensing rights to the Tetris brand, announced they have partnered to launch Tetris® Link™, a tabletop game with multiple layers of strategic game play for the whole family.

In the Tetris Link game, players battle to score the most points by linking colored Tetriminos, the iconic Tetris playing pieces, into an upright game tower while attempting to block competitors from linking their game pieces.” 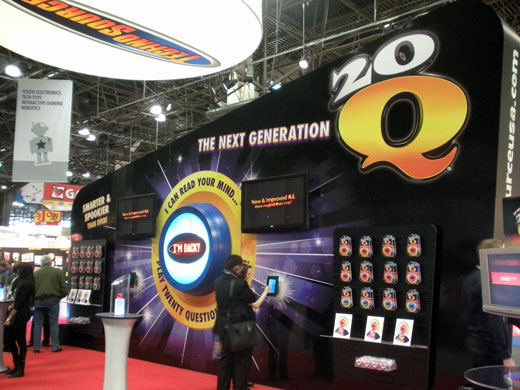 About 20Q from the Techno Source press release:

“Another iconic brand joins the Techno Source family with the introduction of the all new 20Q®, a next generation of the best-selling electronic handheld game of twenty questions that has sold millions and millions of units worldwide. Players think of any animal, vegetable, mineral or other object, and 20Q magically reads their minds by deducing the answer in twenty questions or less.”

The theme of the 50′ x 60′ LEGO exhibit was: “A New Toy Every Day!”. The LEGO team are the most amazing people to work with. The LEGO graphic designers never fail to come up with fun & fantastic graphics that are always a blast to produce. The LEGO Systems booth did a great job to capture the spirit of the LEGO brand and its theme of “A New Toy Every Day!”. The Creatacor Warehouse & Logistics (and whatever else you need) Manager, Roland Dubrey (Rol) and his team, did another superb job putting together the booth. Kudo’s to Rol & his team in putting together the LEGO Licensing booth as well. 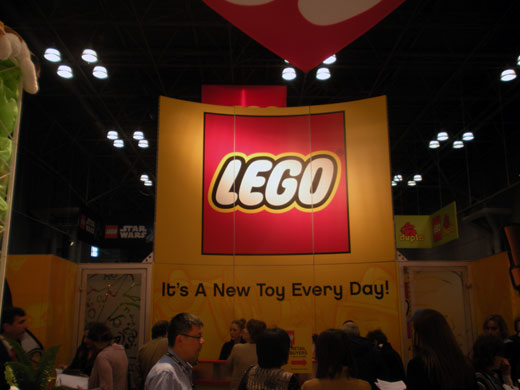 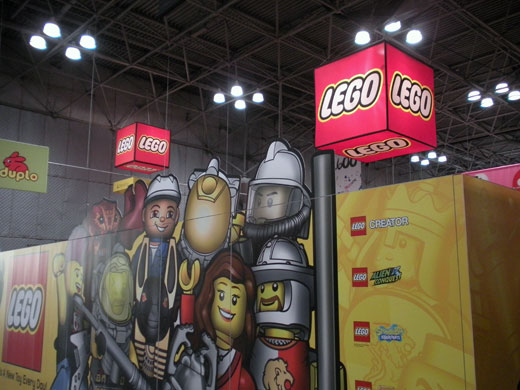 LEGO unveiled their largest collection of toys ever, which includes 170 new products. Highlights include sets inspired by Disney-Pixar’s “Cars”, Disney’s Pirates of the Caribbean films and the continuing series of Star Wars movies and cartoons. The new ninja inspired NINJAGO sets were also featured. 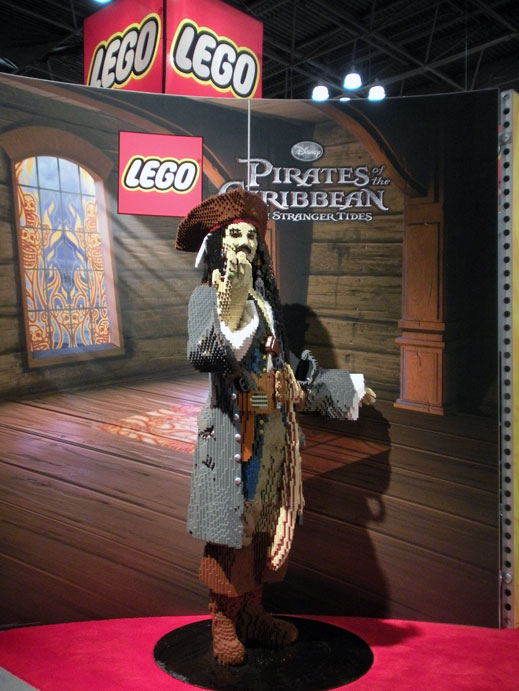 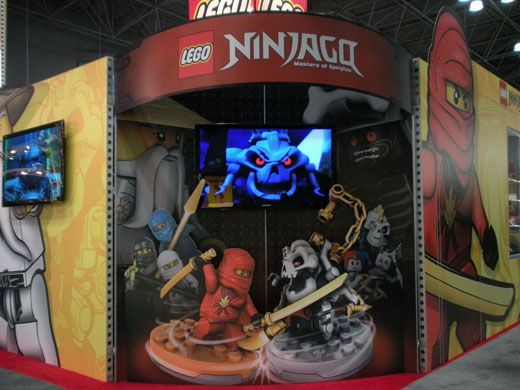 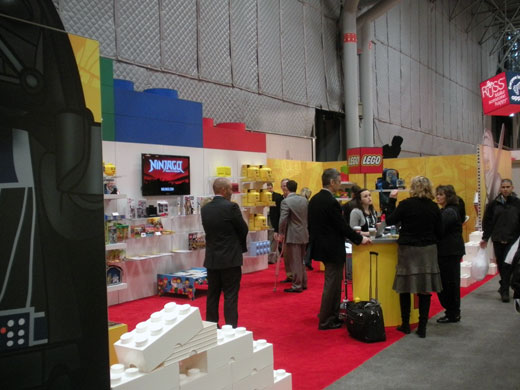 Another LEGO highlight at the show was the Lightning McQueen model, measuring 12 feet long by 6 feet wide by 4.5 feet tall, which commemorates a new collection of LEGO building sets inspired by Disney-Pixar’s “Cars” franchise. This model was displayed at the entrance of the Javits Center. 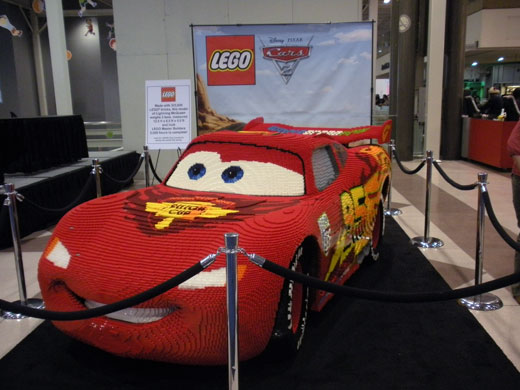 Check out the impressive specs for the building of this model: 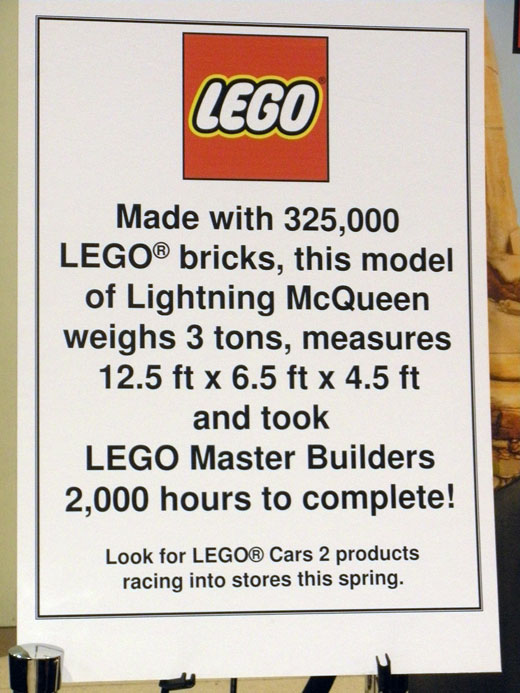 A very special thanks to Dave in helping produce another great Toy Fair for LEGO. This looks like it’s all big stuff, but it’s just like a LEGO model; the models start with a single brick & our displays start with a single bolt. After many hours they all come together to make something very cool.

See you next year!